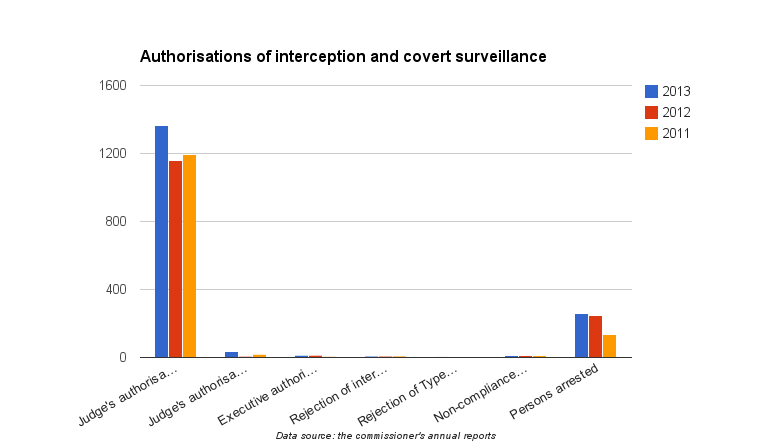 In a Legislative Council meeting this Thursday, deputy secretary of security clarified that the law enforcement’ request for communications content that is in the course of transmission is governed by Interception of Communications and Surveillance Ordinance (ICSO).

In a reply to IT Legislator Charles Mok’s question on law enforcement’ controversial practice of asking for web users’ data without adequate judicial scrutiny, Millie Ng, acting deputy secretary of security, said law enforcement officers must apply for authorisations from a judge before carrying out interception operations, or requesting communications content in transmission from service providers.

The Commissioner on Interception of Communications and Surveillance, who oversees the compliance by law enforcement agencies with the ordinance, shall notify the relevant person if the commissioner considers the interception or covert surveillance has been carried out without  authorisation. However, the ordinance does not mention if the person whose communication has been intercepted or surveilled will eventually be notified.

Darryl Saw, the incumbent commissioner, indicated at the annual report briefing last December that law enforcement officers can apply for subpoena to a magistrate to request from service providers information already received by the target (e.g., text messages), which is a very different matter from the interception operation covered by the ICSO.

The ICSO states that

S2 (1) “intercepting act”(截取作為)  in relation to any communication, means the inspection of some or all of the contents of the communication, in the course of its transmission by a postal service or by a telecommunications system, by a person other than its sender or intended recipient;

S2 (5) (b)… a communication transmitted by a telecommunications system is not regarded as being in the course of the transmission if it has been received by the intended recipient of the communication or by an information system or facility under his control or to which he may have access, whether or not he has actually read or listened to the contents of the communication.

Back in 2013, the Supreme Court of Canada ruled that seizing text messages stored by service providers would be an interception and requires a wiretap warrant, which is more difficult for the law enforcement to obtain than a general search warrant.

In 2014, Hong Kong police made around 4,234 pieces of requests for user’s meta data (e.g. IP address), only partial of which were made under court orders, and partial of the requests were acceded to by service providers. In the first half of 2014, Google received 359 user data requests from Hong Kong law enforcement, and the company only complied with half of them.

In response to legislators’ concern over whether the law enforcement will carry out  covert surveillance against political activists in Hong Kong, Ng said neither the former and nor the incumbent commissioner have noticed such operations in their terms of appointment.

The ICSO specifies that

S 2 (7) ..advocacy, protest or dissent (whether in furtherance of a political or social objective or otherwise), unless likely to be carried on by violent means, is not of itself regarded as a threat to public security.

Hong Kong residents’ privacy of communication is protected by the Basic Law. Article 30 of the Basic Law promulgates: