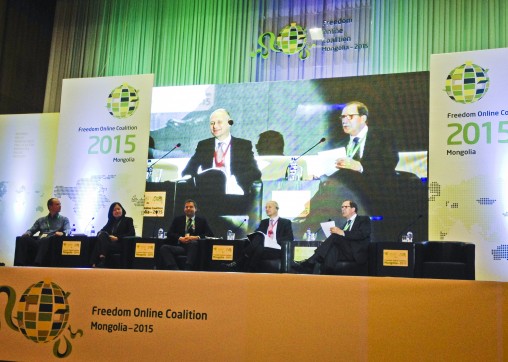 Here is a recap of the sessions Hong Kong Transparency Report participated at the Freedom Online Coalition conference in Ulaanbaatar.

On 4 May afternoon, HKTR presented our research findings at the regional plenary on Internet Freedom Trends in Asia, and painted a general picture of Internet governance in Hong Kong from transparency and privacy perspectives. As seen in many other jurisdictions, the legal and regulatory development has not been able to catch up with the technological advances and the expansion of law enforcement powers on the Internet. HKTR shared with other panelists and the audience the common concern over government accountability and the lack of judicial scrutiny over law enforcement’s exercise of surveillance and censorship activities in cyberspace. All those issues pose severe threat to netizens’ privacy rights and free speech.

Throughout the conference, HKTR had the chance to exchange ideas on Internet transparency, accountability and privacy issues with other transparency reporting projects and initiatives in South Korea, the United States and Europe. HKTR appreciates the opportunity to partake in this year’s freedom online coalition conference.