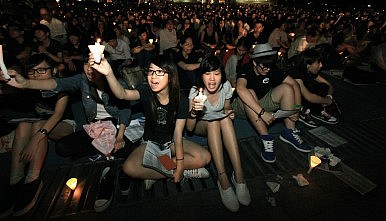 Posted at 06:00h in Freedom of Speech, Section 161 by Jennifer Zhang 0 Comments
0 Likes

Activists claim that authorities are using an ambiguous ordinance in a selective crackdown on free speech, wrote Hong Kong Transparency Report’s Jennifer Zhang for The Diplomat.

A series of controversial arrests of social media activists in Hong Kong since last year’s Occupy Central movement has raised concerns that the government is exploiting the flawed cyberlaw to suppress political speech online in a period of intensifying social and political tensions.

On May 29, Tam Tak-chi, leader of the radical democratic coalition People Power, was arrested for a Facebook post that authorities argued “incited others to commit illegal acts” during road the funeral of Beijing loyalist Yeung Kwong’s body. He was later released on bail and believed the arrest was to warn him not to participate in the June 4 vigil, the Legislative Council’s vote on the political reform package, and the July 1 march.

Two days earlier, Barry Ma, chairman of local pro-independence group Orchid Gardening, was arrested forsuggesting on Facebook it was only reasonable to exterminate the entire family of a pro-police columnist.  Two months before that, a 27-year-old autonomy group member was arrested for posting a guide on a local website about how to make weapons (e.g., gas bombs) to attack police during the anti-parallel trade protests.

According to a database maintained by Hong Kong Transparency Report, an independent research project under the Journalism and Media Centre, The University of Hong Kong, since June 2014, at least nine activists have been arrested for online remarks. All were charged with under a controversial provision – “access to computer with criminal or dishonest intent” – and three have been sentenced to either community service or rehabilitation center.

To read the full story, please refer to The Diplomat blog.