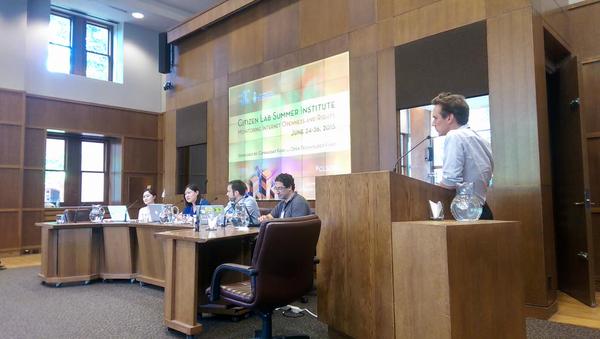 Hong Kong Transparency Report (HKTR) participated in the 3-day workshop hosted by Citizen Lab Summer Institute at Munk School of Global Affairs, The University of Toronto in late June. Here is a list of activities HKTR engaged in during the workshop:

In the next two days, HKTR shared our experiences and knowledge, and also learnt from other workshop participants in a series of transparency reporting related breakout groups, which include:

This session was led by Christopher Parsons and Andrew Hilts from Citizen Lab.

This session was led by Andrew Hilts from Citizen Lab / Open Effect.

Access My Info (AMI) is tool which has been used in a collaborative project between the Citizen Lab, Open Effect, and Open Media. AMI currently lets Canadians quickly generate legally binding requests for their personal information from Canadian telecommunications companies. This session discussed ways of expanding the tool’s deployment to other jurisdictions.

This session was led by Christopher Parsons and Andrew Hilts from Citizen Lab.

Academics, advocates, and policy analysts are all involved in collecting, analyzing, and comparing the transparency information that is provided by government agencies and corporations alike. A series of different models to presenting data have been adopted around the world: these models are used to explain privacy and data management practices to public and policy audiences. This session explored how and why participants have collected the data they are using, or hope to use, in their own reporting, as well as address why data is, or is planned to be, presented in the format that is has. What is the value of ranking systems, star-based evaluations of practice, or more detailed policy analyses? When should different reporting formats be used? When shouldn’t they? What are some of the challenges experienced in creating these intermediary reports, and how have they – or might they – be overcome?

This session was led by Chris Prince from Canada’s privacy commission, Jon Penney from OII, Peter Micek from Access, and Tamir Israel from CIPPIC.

The past two years have seen substantial changes in state surveillance regimes in the United States, United Kingdom and Canada. In the United States, the Snowden developments have led to the first congressional rollback of foreign surveillance powers in recent history in response to the Snowden revelations. At the same time, cybersecurity initiatives on the horizon threaten to expand the scope of public-private information sharing. Canada, for its part, has seen the first major overhaul of its privacy and surveillance laws in years, with sweeping changes to several core statutes all with an eye to expand the surveillance capacity of various state agencies. The United Kingdom has also experienced the promise of increased surveillance, with an anticipated ‘snooper’s charter’ expected to impose surveillance backdoors on services. This session gave participants an overview of developments in these countries, touching on themes relating to breach reporting, investigative tools and powers (including remote intrusion / malware), info-sharing authorities and obligations, and surveillance backdoor obligations. These were examined with a view to how this may impact on transparency and the public debate of surveillance practices in the future.