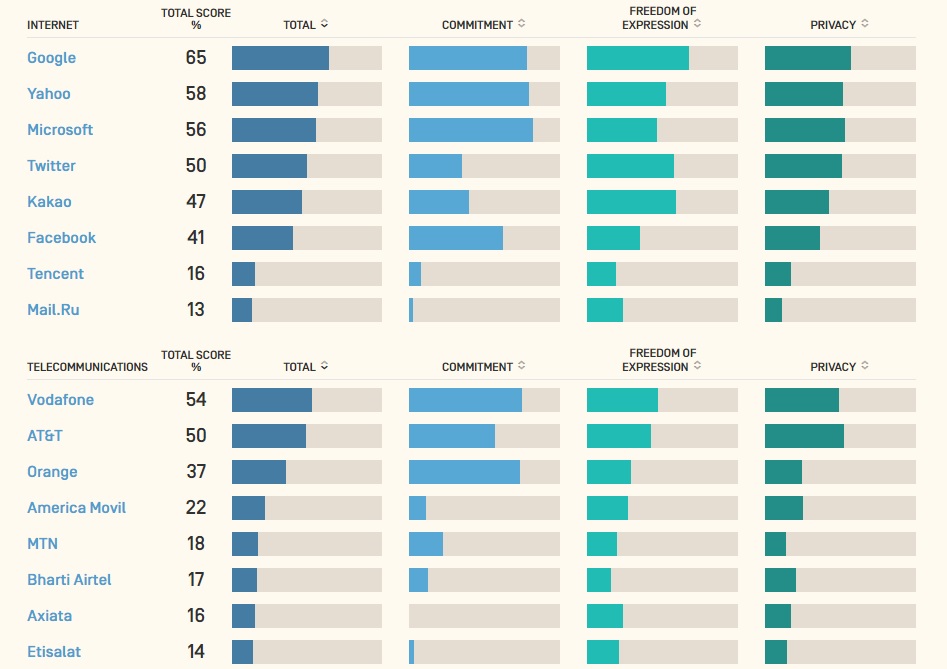 An index examining tech giants’ performance over respecting their users’ freedom of expression and privacy was launched on 3 November in New York, with Google rated the highest and Chinese Tencent the third lowest among the 16 companies which were reviewed.

“It is vital that Internet and companies run Internet adherent to a commitment to human rights, a commitment to the freedom of expression and privacy of their users if we want the Internet to be something compatible with human rights,” said Rebecca MacKinnon in the launch event. Once an assistant professor at The University of Hong Kong’s Journalism and Media Studies Centre, MacKinnon is now the director and founder of the Ranking Digital Rights project, which kicked off in 2013 and she spent over two years before the result of the first patch of companies was released.

In the report 2015 Corporate Accountability Index, eight Internet companies and eight telecommunications companies were evaluated, including Facebook and Google from the US, KaKao from South Korea, Mail.ru from Russia and Tencent from China. The report explained the selection of companies “was based on several factors, including geographic reach and the diversity of markets”.

The highest score, 65 percent (out of a total of 100), went to Google, which was followed by Yahoo with 58 and Microsoft with 56. The Russian email, instant messaging and social network service provider Mail.ru Group was ranked the lowest with 13 percent, followed by Malaysian mobile service operator Axiata and Chinese Tencent with both 16 percent. Tencent’s popular businesses QQ, Qzone and WeChat were all reviewed.

But the project pointed out that the highest percentage of 65 was still not a good score, not to mention only six companies scored above 50. “There are no ‘winners’,” the report said. “Even companies in the lead are falling short.”

The evaluation of the companies for the index consisted of 31 indicators divided into three categories: commitment, freedom of expression and privacy. The report says the research team basically reviewed publicly available information, but still contacted the companies for feedback in case the researchers missed anything already published.

“No company in index provides users with sufficiently clear, comprehensive, and accessible information about the practices they have in place that affect freedom of expression and privacy,” the report concluded. “These include the handling of user information, terms of service enforcement, government requests and private requests.”

However, the new index did not come only with bad news. One of the good news was that transparency reporting was becoming a standard practice among the businesses in the survey. The project found nine of the 16 companies had published some forms of reports that covered types of third-party requests, and the information provided was still being improved.

Even the low-ranking Tencent was making effort to protect their users’ rights. The report in particular mentioned the cyber-attack prevention videos produced by Tencent’s QQ, the most popular instant messaging application in China.

“Disclose and communicate information that all stakeholders can understand, not just [to] telecommunications regulators or Internet policy specialists,” the report suggested.

According to the project’s website, the adoption of the index is going to extend to companies that produce software, devices, and networking equipment in 2016.