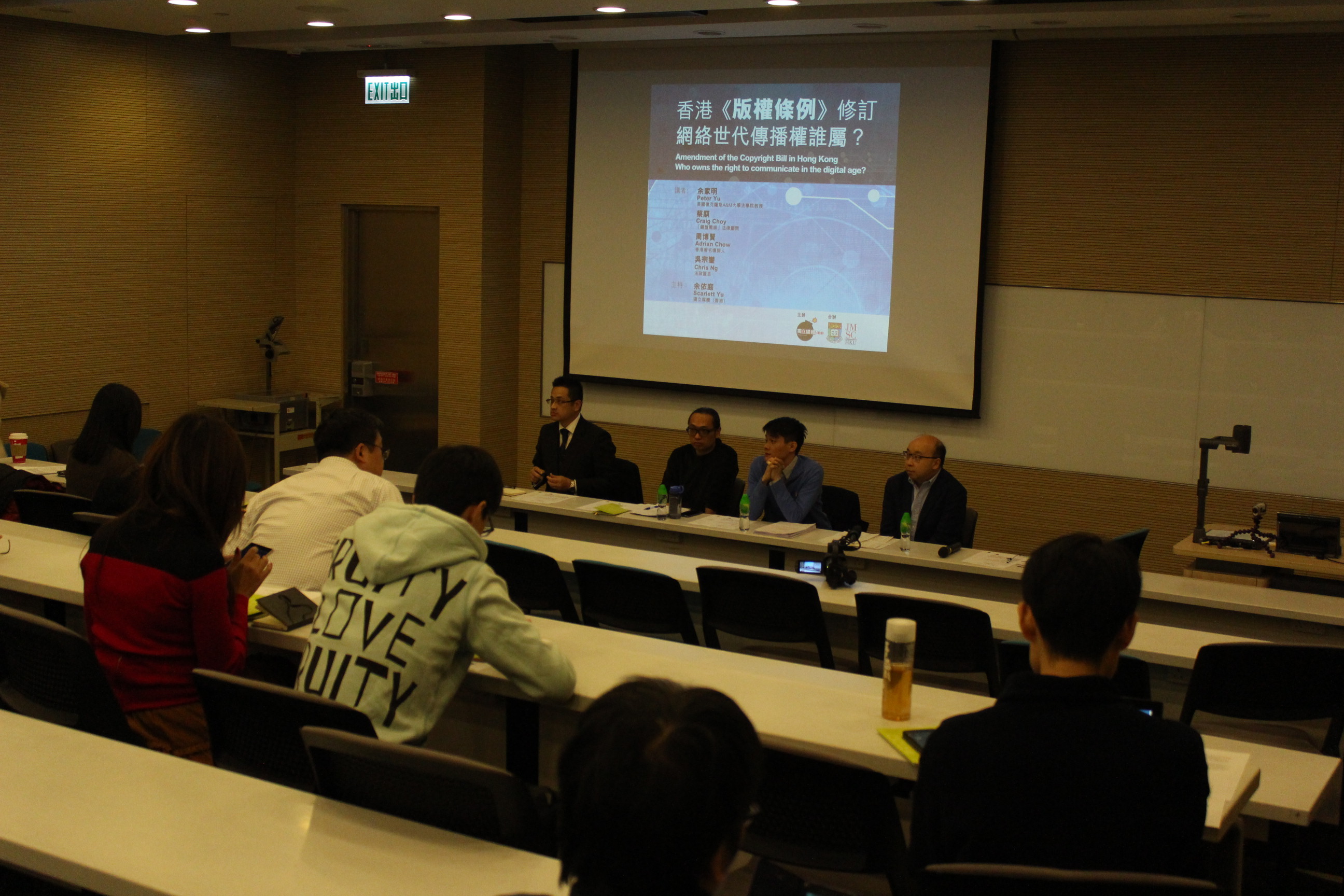 Posted at 03:43h in Freedom of Speech, Legislation by Benjamin Zhou 0 Comments
0 Likes

Professor Peter Yu, an international copyright expert said at a seminar that the exceptions in Hong Kong’s amendment bill were less clearly defined than the government claimed, but the rare mix of the British “fair dealing” and the American “fair use” doctrine might narrow the scope of exceptions.

Yu is a professor at Texas A&M University in the United State. He made the comment as a guest speaker at a copyright seminar at The University of Hong Kong on 18 December 2015. Other speakers were Craig Choy from a netizens group Keyboard Frontline, Chris Ng from the Progressive Lawyers Group and a renowned local lyricist Adrian Chow.

Peter Yu is an authority in international intellectual property rights. In 2013, he composed a submission for JMSC to the Hong Kong government during public consultation of the amendment. In the submission, Yu urged exemptions for copyright violations of parodies on the Internet, among others, in order to prevent Internet users from mistakenly falling into legal trap.

Yu’s recommendations were later incorporated into the official consultation paper, before a provision was prescribed in the bill:”fair dealing with a work for the purpose of parody, satire, caricature or pastiche does not infringe any copyright in the work.” The exception is also called “fair dealing” in short.

The concept of “fair dealing” originated in the United Kingdom, which normally prescribes a list of exemptions from copyright infringement. But the current Hong Kong bill has added a requirement that the court should consider commercial purpose and three other circumstances before it determine a “fairing dealing”. The additional four circumstances is copied from the “fair use” principle adopted in the United States, where exemptions are based on some principles other than a prescribed list. “Fair use” is regarded as more open and flexible than “fair dealing”. Yu said the mix of two doctrine might narrow the scope of exceptions.

The amendment bill drew criticism pointing to its inadequate protection to creative freedom. The legislature vote scheduled on 9 December 2015 was postponed into 2016 as Legislative Council meetings were adjourned by pan-democrats’ repeated calls for headcount, a sort of filibuster.

“In Hong Kong, it is for sure that ‘fair dealing’ is not so clear as in the UK,” Yu said. Considering “fair dealing” and “fair use” at the same time, he said, was because the Hong Kong government followed the British legacy, whereas it had to respond to copyright protection pressures from the US. “But why shouldn’t [the government] choose an open [exemption]?” Yu suggested to pursue the American “fair use” measure without other restrictions.

Yu said the conflict now lay in that the copyright owner wanted to set a higher threshold for exemptions, while Internet users asked for a lower one. “They are not targeting netizens, but actually seek money from online intermediaries,” Yu said. “However, the intermediaries will not pay if netizens make no infringement.”

Citing YouTube as an example, Yu said the video streaming service company would have not signed agreements with copyright owners for authorisation if its users did nothing to do with infringement.

For the newly introduced “safe harbour”, Yu said the mechanism aimed at protecting service providers actually did not protect online intermediaries, such as YouTube, which makes profit from increased traffic that might be boosted by unauthorised videos. The service providers under the protection of “safe harbour” are those who only charge users of fixed subscription fee.