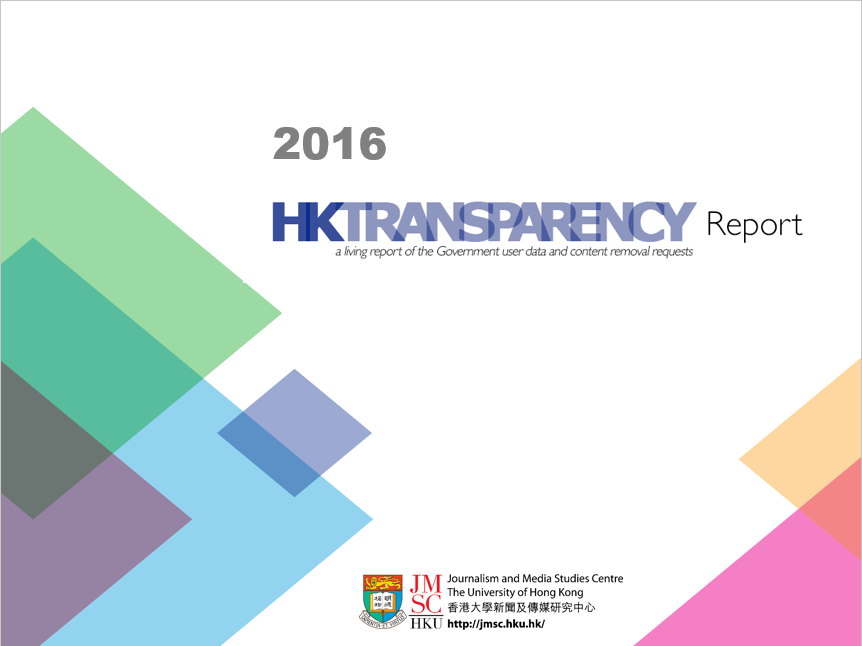 Between 2013 and 2015, the number of annual user data and content removal requests from the Hong Kong government decreased from 6,008 to 4,637. The report finds that seven international ICT companies, including Google, Microsoft, Twitter, Yahoo, Apple, Facebook and Verizon, accounted for 44% of all user data requests from the Hong Kong government, and rejected 40% of them.

Hong Kong Transparency Report (HKTR) is a project hosted by the Journalism and Media Studies Centre (JMSC) at The University of Hong Kong. HKTR centres on how the Hong Kong government sends requests to information and communication technology (ICT) companies for their users’ data and to remove online content for purposes including crime prevention and law enforcement.

In the five government replies to legislators’ questions since 2013, Hong Kong Police Force—which accounted for 87% of all user data requests, with an average of 4,220 cases a year— never revealed how many of the requests were sent with court orders, or how many were complied with by companies.

The report urges the government to review user data and content removal request mechanisms, and routinely publish such statistics on biannual basis, which is an international transparency reporting standard. It also recommends that Hong Kong ICT companies publish regular transparency reports, in the same way that other 61 tech firms around the world do.